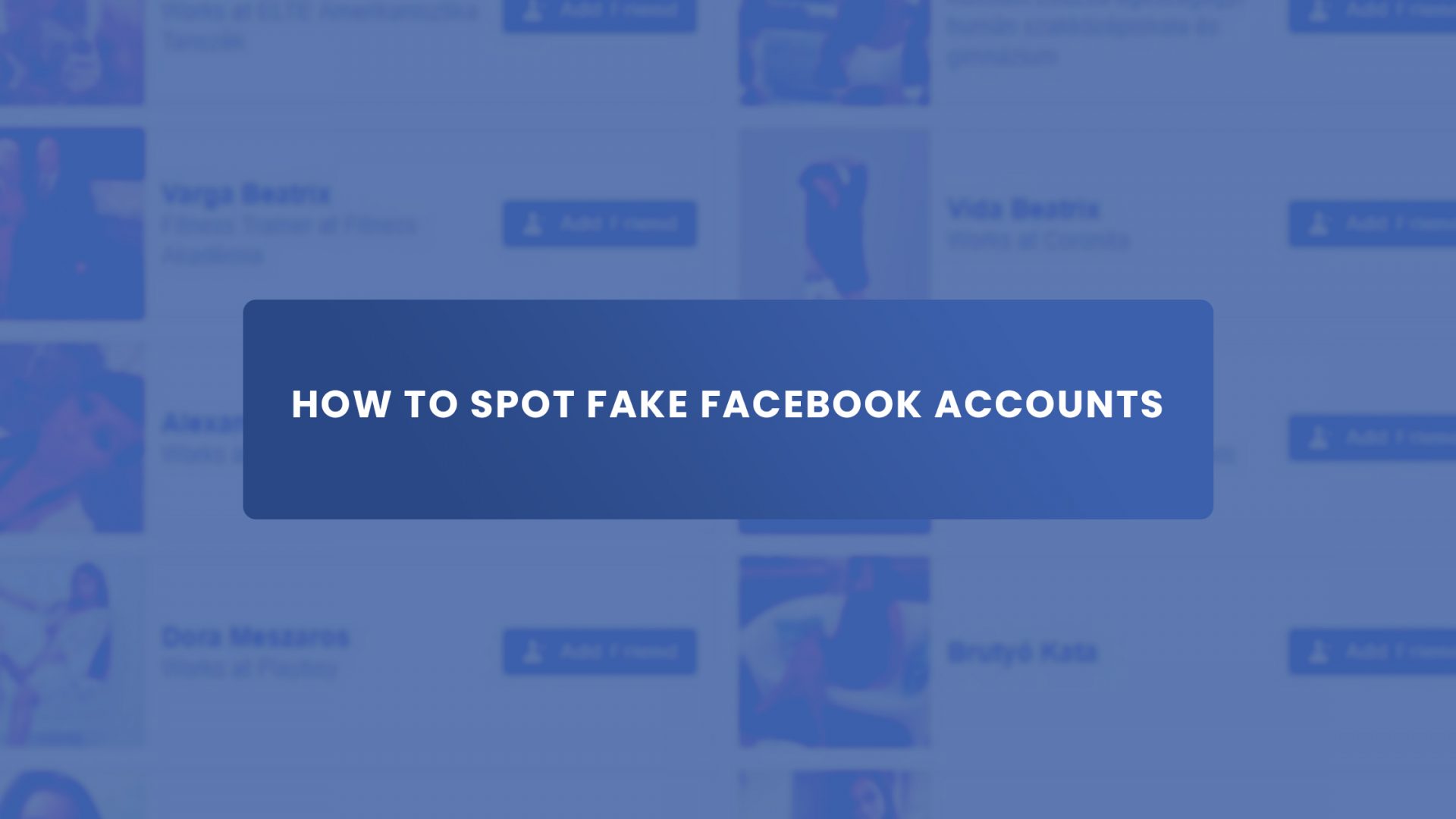 In 2021, Facebook declared that approximately 5% of the estimated 2.3 billion users are fake or duplicates. There have been many reported cases of individuals being duped by fake Facebook accounts.

As a user of Facebook, you will eventually encounter quite a number of them. One common way is through friend requests. In addition, if you’re an admin of a Facebook group, you will most likely be inundated with numerous requests to be part of the group. There is a good chance there are fake accounts out of the numerous requests.

In this article, we have listed the signs to look out for to determine whether a Facebook profile is real or fake. Let’s get started.

This is necessary when you find yourself getting more friend requests than usual, and most of these requests come from people you don’t share mutuals with. There is a very high possibility that some of the requests are from fake accounts. The warning signs are always there; all you need to do is to look more closely. A Facebook account that displays at least three of the following signs should be summarily bypassed.

Active users of Facebook routinely update their profile and cover photos. This means if you are seeing a profile photo that is about 2 years old and above, that should ring an alarm. Worse off, an account without a profile photo. That should get you concerned.

A profile photo shouldn’t be all that perfect. Most often, people take pictures with their phones and upload them. If the profile photo of a Facebook account is a perfect picture with the right angles and lighting, you are most likely looking at a fake account.

To verify the authenticity of the profile photo, you can download the picture on your device and then launch Google Image Search. Upload the photo and click search. If the account is fake, there will be a lot of matches popping up for that photo across the internet. This is because fake accounts use pictures that they downloaded from somewhere on the internet as their profile photos.

Still, on photos, real Facebook users post pictures on their pages frequently. It could be pictures of memorable moments, their spouses, kids, parents, extended families, or just them doing their daily activities. A visit to the photo gallery of an account can also shed more light on its authenticity. Seeing just a few photos in an account that is over three years certainly proves that the account is fake. Fake accounts do not post frequently.

A person’s bio says a lot about the person. The same applies to social media accounts. One of the features of Facebook accounts is the About Section. Here users can give a brief and detailed description of themselves. It also provides a means of introducing oneself to other Facebook users. Definitely, if you want to feel comfortable about accepting a request, have a look at the bio.

Real Facebook accounts bios are filled up with their achievements. Their bios are replete with detailed descriptions of what they have achieved. From their bios, you can become knowledgeable about the schools they attended, the year of entry as well as the year of graduation. Even information about their employment is also available. By the time you look through a Facebook account, and you don’t see anything in the About Section, that account is most likely fake. Best you have anything to do with such an account.

Even in cases where that section is filled, you still need to be sure that the information provided is not vague. Fake accounts don’t usually go into detail about the schools they went to or where they work. Also, they prefer filling in famous places such as New York, Los Angeles, or Paris. Famous universities such as Harvard University, Oxford University, and John Hopkins University. When you come across a bio that reads born in San Diego, California, attended the University of Mumbai, and works for a meat packing factory in Guadalajara, Mexico. You are very well dealing with a fake Facebook account.

The list of friends in an account is another area to look out for when verifying the authenticity of a Facebook account. The way the Facebook algorithm works is it usually suggests friends that are within your locality, so a real user connects with more local people. Looking through the list of friends and you observe more foreign friends than local ones. It is an indication that the account is fake. A person from Tulsa, Oklahoma, shouldn’t have a large majority of friends constituted by Indian nationals.

Another red flag is when you look at the friends’ list of a Facebook account whose profile picture is that of a lady, and you see over 3000 friends. Ladies by nature, don’t add friends randomly. They don’t interact with unknown people, so they have a much-limited circle of friends.

Basically, when you see a lot of friends and most of these friends appear fishy, it is in your best interest not to accept requests from such accounts.

The thing is, a real user randomly posts pictures, videos, jokes, or music. You can’t really pick out a pattern for the posts. Also, genuine Facebook users like to share details of their travels with their friends. It could be pictures or videos. Once you don’t see all these, you are most likely dealing with a fake account.

Lack of Engagement and Unresponsiveness

Fake accounts don’t get engagement. A Facebook account having so many friends yet only having a few likes and comments on posts is a red flag. There is an evident lack of interactions on their posts.

In addition, fake accounts are unresponsive. This is like a confirmatory test. If you suspect an account is fake, send a private message to the user to confirm. If you get no response, it is likely a fake Facebook account. Holders of fake Facebook accounts are not the type to respond to messages. You will observe that these accounts don’t even respond to comments on their posts.

Having spotted a fake Facebook account, the next thing you do is to report it. This can be easily done by tapping the upper three dots occupying the right side of the cover photo and selecting the report option. Reporting a fake account helps to protect other fellow genuine users from being scammed by these fraudulent account holders.

These fake accounts are looking to defraud as many users as possible. This helps to make the platform much safer. Facebook as a social network service is structured in a manner that facilitates quick and easy signup of new users. The aim is to have as many users as possible join the platform. Reporting fake accounts helps Facebook spot them amidst the influx of new users and quickly take them down.

As a useful tool, refrain from divulging so much personal information on your Facebook account. Ensure you keep it minimal and avoid being excessive. It is necessary for the sake of your cyber security.

Your decision to accept a friend request should not be based solely on shared mutuals. Fake Facebook accounts are widespread, so there is a good chance they are also connected to your friends. That is, they are friends of your friends. Hence the reason why you and these accounts both share the same mutuals. As a result, don’t be too comfortable with accounts that share the same mutuals with you. The internet is a peculiar terrain. Not everyone there is your friend, and not everyone is real. Some nefarious elements have taken advantage of the unique interconnectivity presented by these social networking platforms to exploit naive users.

As much as these fake Facebook accounts abound, they are relatively easy to pick out. All it takes is a bit of due diligence, and they are quickly spotted. Don’t be a victim; look out for the pointers mentioned in this article.